Home/blog/Get Out of Your Own Head

Get Out of Your Own Head 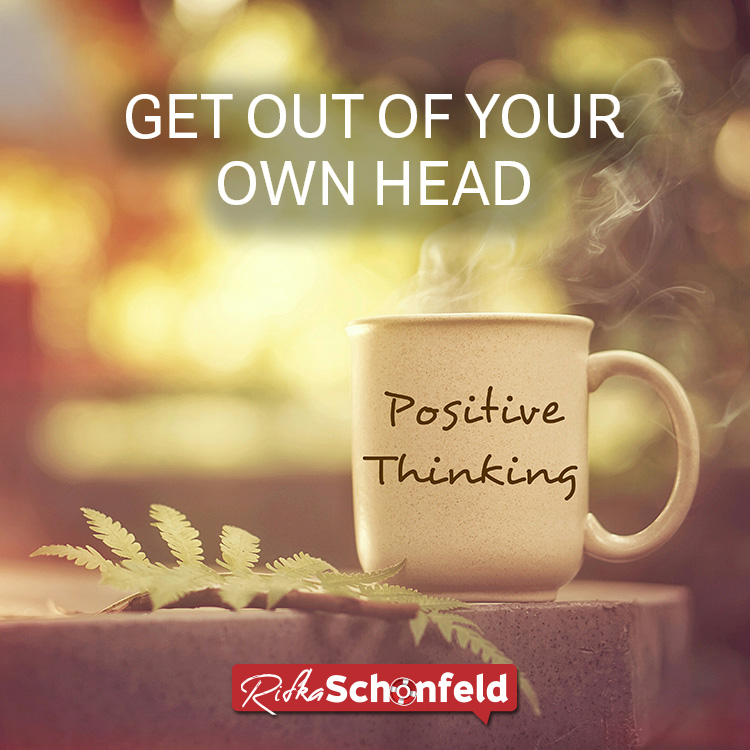 Get Out of Your Own Head

Do you ever find yourself up in the middle of the night thinking about something you said to your friend in high school? Do you ever find your mind wandering while you are driving and drifting towards memories of that bad presentation you gave a work three years ago? If you do, you’re just like the rest of us! But, the good news is that Jon Acuff, a public speaker and author of the book Soundtracks: The Surprising Solution to Overthinking, explains that we can change those “soundtracks” that play in our heads. And changing those soundtracks is actually the key to success in lots of different arenas.

Acuff talks about the problems with overthinking and the ways that it affects our day-to-day lives:

Overthinking is when what you think gets in the way of what you want. It’s one of the most expensive things in the world because it wastes time, creativity, and productivity. It’s an epidemic of inaction, a tsunami of stuckness, and thirteen years ago it was dominating me.

I was the kind of someday, high on thought, low on motion about a litany of things I’d do eventually.

“Quit overthinking so much,” coworkers would beg.

“It’s all in your head,” my wife would implore.

“Get out of your own way,” schoolchildren would yell as I stumbled through the streets like a heavy-brained monster.

Did I want to have 1,345 thoughts about whether there would be adequate parking at the new restaurant we were going to? Did I want to donate an afternoon of brain space to reviewing something dumb I said to a friend three months ago in a grocery store? Did I want to put off asking for a raise for one more month, overthinking the myriad ways it could go wrong?

Of course not, but what could I do?

Turns out, there’s actually quite a lot that you can do about overthinking, and while of course, I think it’s important to take every method that promises success in all areas with a grain of salt, Acuff’s method can be helpful to lots of different people. As Acuff explains, “Overthinking is essentially when your brain spins on a thought or idea for longer than you anticipated.” And, unfortunately, overthinking is generally negative, so that means that the soundtrack that “plays” in your brain is a negative one – about silly things you have said or done or anxieties that would be better ignored.

There’s something else that Acuff explains about our brains. And he is very clear that his information is based on research and science, rather than anecdotal evidence. Ultimately, our brains also build on the natural tendency to “go negative” by doing three additional things:

While we may believe all of our memories, sometimes those memories are simply not true. That does not mean that we consciously made the decision to remake those memories, but the reality is that our brains to occasionally rewrite our memories and sometimes what we remember is simply not true. This cycle of negativity continues when we believe that those events were traumatic and then refuse to reevaluate even when presented with the hard facts. There is a fascinating study that a professor in a university conducted with his students in which they recorded a recent event in their own handwriting and then were asked about that memory 4 years later. When their new memories conflicted with the old ones (more than half the time!), the students acknowledged that the handwriting was theirs, but there must be a mistake with the memory.

So, what can we do to break this cycle of negativity and use this process of overthinking to our advantage? Acuff argues that there are three actions to change your thoughts from a super problem into a superpower:

What does this mean? Well, first you need to look for the things you say to yourself that are negative or destructive. Then, you need to retire those “broken soundtracks.” The thing is that without new soundtracks, or new thoughts, you will ultimately return to the old ones. Instead, replace those old thoughts with new positive ones. And then repeat those thoughts to yourself until you start thinking them automatically (and then believing them). What can you do with ew soundtracks? Jon Acuff would argue you can completely change your life.